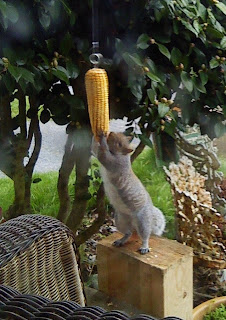 Not long ago, while at work, I came across an interesting apparatus in the critter feed section: a bungee cord for squirrels. Now I know what you're thinking. Perhaps it's a trap, you think, that catches the little pests by the hind ankle and then drops them from great heights to have them boing up and down for an amusing show. I did buy it for the dog's amusement, but it's not a trap. Rather, it's a squirrel feeding device. An ear of corn is screwed on to the end of a chain with a heavy-duty elastic cord. The idea is for the squirrel to climb onto it and proceed to bounce up and down while enjoying its feast.

Ideally, the bungee should be attached to a tree branch where the little darlings can climb down it and start the thing in motion. Since we don't own a big tree, it got attached to a hook off the roof of the front porch. We had visions of squirrels clambering to get at the dried corn, but were sorely disappointed. There it sat for days, ignored while squirrels scurried about around it. Then one day, the dog went off and lo and behold one was interested. The only problem was that the corn couldn't be reached from below. Without access from the top, it became a dangling tease.

So Roland set up a step. Now it hops up on its tippy toes and pulls the corn husk down, chewing off the kernels from the bottom up. The only bouncing is when the squirrel lets go and the thing springs back. As far as we can tell, there's just the one squirrel visiting the bungee. It happens to be the same squirrel that kept coming into the house last fall (see http://www.mogcottageurbanfarm.com/2012/09/squirrel-obsessed.html ). Snorky must have been able to catch it in the house at the time because I found a piece of squirrel tail in the living room. Our bungee cord squirrel is missing the end of its tale. We named it Stubby. Snorky bonds with it through the living room window on a daily basis.
Posted by Unknown at 6:07 PM

Email ThisBlogThis!Share to TwitterShare to FacebookShare to Pinterest
Labels: squirrels