Yet Another Use for 2 Liter Bottles

Now that the weather's warmer, I took the bottle cloches off the tomatoes. The tomato plants outgrew them anyway, becoming rather contorted in the confines of their biospheres.

Instead of storing away the bottles though, I've discovered a new use for them. I flipped them upside down and with some pressure, snugged the bottle tops into the soil enough to hold them in (like the wine bottles). I also stuck a stake through each one just to help keep them upright. Each tomato plant got a bottle planted next to it.

Now, instead of watering the whole bed, I simply fill each bottle up with water and let it slowly soak in. That does two things: it provides a steady amount of water over a longer period of time and it prevents the problems that overhead watering causes with tomatoes, i.e. fungal diseases. I know the water is going directly into the root system too. I can add some fertilizer or Epson salts to the bottle when need be. Yet another use for those plastic bottles until they are ready to be recycled or stored. 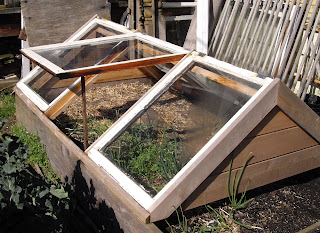 Roland recently - OK, recently for him - built a cold frame over half of one of our raised beds. He used old windows he salvaged off a job, built a simple frame, cat-proofed it (of course) and put knobs on the doors. Both sides swing all the way open, or I prop them open with one of the rare sticks lying around. I did a happy dance, kicked the cats out (they found a way in anyway), and put in Red Zebra tomato starts that I've raised since the seed I collected from last year's crop. Being sealed off from the weather, the trick of all this is to regularly water the contents. Several times I didn't get to that part fast enough and the tomatoes went limp, looking like a rag-tag man crawling across the desert reaching out to nowhere crying, "water." Fortunately, I did water them in time to re-inflate them back to somewhat of an upright position. I've just been testing how tough they are, ya know.

Now that it's May, I rescued them from the abuses of my cold frame care and stuck them out in the chosen bed for the season. Because the raised bed is in the parking strip, I wasn't keen on putting up a hoop house. They can look rather tacky. It's a hot, sunny location and I feel the tomatoes only need protection until they get well established. So, I did the next best thing and put bell cloches over each plant. Now, I'm not one to go out and buy glass cloches at $35 plus a pop. Instead, I re-purposed the copious amounts of 2 ltr. water bottles I've stashed after swallowing the contents.

I simply cut the bottom off using the conveniently placed embossed line around the circumference as a guide. Then, I just pushed them into the soil deep enough to hold them in place and, voila! free cloches and no need to worry about watering until after July 4th. Lost the lids? No problem. Use wine corks instead. I'll vent them during the day by keeping the cork off so they don't get all that tomato fungus and then to keep the heat in, I'll cork them up at night. Not too difficult to remember, right? Yeah, right.

Of course, the cat proofing had to be modified to accommodate the new configuration. That detail provides me with two more wood cat proofing grids to use as trellises for perhaps, cucumbers or some such viney veg.
Posted by Unknown at 1:05 PM 2 comments: