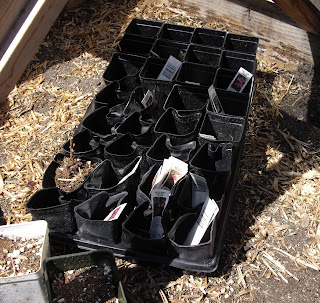 When Roland built a cold frame out of recycled windows over one of the raised beds I was thrilled with the fact that I would have a place to harden off veg starts in early spring and germinate some more throughout the season.

I even prepared for warmer weather by cracking open the doors enough to vent out any hot air. We had beautiful starts of cucumbers, beans and other veg and even some ornamental plants coming up. Roland spent a bit of time planting and labeling the pots. Then one morning, when checking on things, the pots were bare soil!

Yep, something decided to munch down everything nestled in 4 inch nursery pots we had cultivated. Gone. This discovery prompted one of the few times that I wished I had a shotgun. But then I would have to sit up all night into dawn to catch the marauder, and I wasn't about to do that. Only gardeners who grow giant pumpkins do that. And that's on the East Coast.

You'd think our lazy, well fed mogs who love to lie around in there during the day would have been on guard, earning their keep. Of course any number of urban wildlife could have helped themselves: raccoons, opossums (highly unlikely) or squirrels. Much too much pest for a domestic feline to handle, of course. Since the doors were open just a couple of inches, I'm guessing a rodent of some sort or a herd of snails had their feast. What I should have done was close the thing up each night and then vent it during the day. What's interesting is that none of the outside crops got mowed down like that. Phooey!

So, instead I just shut the doors and ignored it all in a sort of denial that gardeners get when they know they've been outmaneuvered, sort of like that farmer in Shawn the Sheep cartoons. But that decision would also come back to bite me. After a cold, wet June we finally got some hot weather starting July 5th. Great, only that I underestimated how much heat nursery pots can take. I finally looked inside the cold frame on a hot summer day and noticed that a flat of empty nursery pots stored inside had turned into a Salvador Dali still life. I now have a flat of melty-pots. I guess you could also say that they were divinely inspired by the ghost of George Ohr. Instead of the "Mad Potter of Biloxi," I could become the "Mad Gardener of Ballard." Mad is the operative term here.

Note to self, #6 plastic melts in a cold frame turned hot house.
Posted by Unknown at 2:55 PM