My Saffron Crocuses Are Blooming! 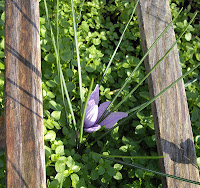 Several months ago, I planted one of the claw foot bathtubs with saffron crocuses. Silly me was thinking that they wouldn't come up until next summer, like the instructions stated. They're fall bulbs after all, blooming in late summer after the dry season. But suddenly, before I could pull out the chickweed infestation, Roland announced that my crocuses were growing. Already!? I was simply flummoxed by the whole thing. I know some crocus species come up early, but not in late fall.It's the rainy season, so having to harvest the tasty bits could be tricky. I managed to get the red threads out of the two blooms that opened up before they were completely obliterated by the pounding rain.

I'll have to keep saffron vigilance now if I want to take advantage of the flower's tasty bounty. Or maybe the two blooms were it. I'm hoping to get enough now for a pan of paella. I hate just getting a tease of what's supposed to come next year.