The Sustainable Ballard folk invited us to participate in this year's Edible Garden Tour to be held June 29th. It's a walking tour of various edible gardens within the parameters of a certain area of town. The rotation hit our neighborhood this year.

There's nothing like a deadline to get things done. Roland's been diligently finishing up the garden shed's green roof structure (upon penalty of death) while I've mixed the substrate and acquired more succulents. I've been weeding, pruning, organizing and planting. I've also made signs and blurbs for various plants and processes so folk can learn about certain whats, whys and hows of the place.

My daughter Shawn and her husband, Rick will be the docents as we will be gone that day, but I have every bit of confidence that they will do an excellent job representing our vision. And they have cell phone access to us too. 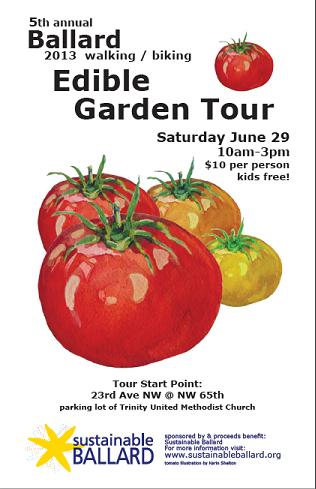 Posted by Unknown at 1:48 PM No comments:

The Mason Bees Are Placed Out....Finally!

What to do with that gable end on the garden shed. That's been our quandary for the last year or so. Finally, the answer came to us in the form of mason bees. One of the few perks of working at a garden center is the occasional free stuff. The supplier of mason bees brought in a bunch of boxes of the bees in for the employees. Never one to pass up the free box, I brought around a dozen or so home. I figured there wouldn't be a whole lot of takers, given that mason bees require special accommodations.

So, Roland came up with the idea of incorporating mason bee houses into the gable ends of the shed. There are several good web sites that give information on how to build mason bee housing and about mason bees in general (PDF Here). The key is to get the tunnels right. Roland used a router bit and carved out half circles in a bunch of boards. When two halves are put together, they form a tunnel. Of course, you can purchase pre-made houses of various sorts, but if you have a wood worker in the household....

Mason bees are like flying salmon. You simply place the boxes of eggs next to the houses of tunnels and once they hatch, they fly out, do their thing then come back to the same place to lay the next generation. Each box of bees contained the eggs of 8 females and 4 males. Since we were late getting the boxes out, it didn't take long for them to bust out. It's a temperature thing. Hopefully, the holes will fill. The females control the sex of their prodigy. As in much of the animal world, the males are expendable, so their eggs get laid in the front part of the tunnel, lest they get devoured by another critter that finds them tasty. In the fall, we'll break apart the houses and store the eggs in the refrigerator for the next season. If you don't harvest the eggs, they can get attacked by mites. In early spring, the eggs go back out next to the cleaned (and sanitized!) houses for the next go around. Since the bees are the first pollinators, it's important to get them out when the fruit trees are blooming. They can handle colder weather than other bees, so are out before the other bees appear.

Mason bees aren't aggressive, so are easy to work with. In fact, it's just a matter of letting them do their thing. With the proper habitat and happy bees, it's possible to get enough bees over time to share with others. With colony collapse disorder destroying bee populations, mason bee populations need to be encouraged.

Now to finish that green roof!
Posted by Unknown at 10:47 AM 1 comment:

Now that I've been cultivating veg going into the 4th year, I've been determined to better fine tune when I plant certain crops. Not that couldn't plant these crops at other times, but I've decided that there are certain times that suite my life better. As much that seasonality is about crop cycles, it's also about lifestyle. And if the plant has a flexibility, it's good to grow it to best suite how you use it. Given the limited space here at Mog Cottage, in some instances I would rather use the space for more seasonally sensitive crops. Seasonality is also about when pests peak too.

Take kale. Every year I plant kale in the spring only to fight with those pesky cabbage moths ((Mamestra brassicae)) putting up an elaborate hoop house with Reemay to hermetically seal off the kale from the world. All this to keep a leaf eating larvae off my kale leaves. This year may be particularly bad given the warm winter we had. I was given 3 broccoli starts this spring. Since I'm not eating the leaves, I just covered them long enough to produce enough leaves where moth damage won't be so disconcerting.

Last year, I didn't get kale planted until August. Actually, I have been known to let kale go to seed and it comes up on its own quite well, even in late fall! At this point, the moths were pretty much gone while the kale started to grow (draping a bit of Reemay over the bed long enough to establish the plants). Kale over-winters nicely here and I like to use kale mainly in the fall and winter months in soups and stews. It also takes up a lot of space. So, the kale can grow and hog the beds when other crops won't grow because it's too cold. It slows down when the weather gets frosty, but perks right back up when the temperature returns to the mid 40's. In mid-spring, it goes to seed, so it gets yanked. I have enough kale seed to last longer than the seed will be viable.

With that, my winter beds consist mainly of garlic, onions, fava beans and kale. Occasionally, I'll plant other cabbage crops such as Filderkraut and, yes, purple sprouting broccoli is on the list. I recently purchased a new packet of the Ed Hume PSB seeds that famously exploded and lasted three years until an infestation of aphids took it out.

So, for summer, I'm planting a great substitute for kale: Swiss chard. It's a great leafy green from the beet family and can be used in most any recipe as a substitute for kale. It takes up less space, leaving room for summer crops. In fact, Swiss chard has a higher nutrient density than kale containing copious amounts of Magnesium, Phosphorus, Potassium, Copper, Beta carotene, Isoleucine and Phenylalanie. Swiss chard is a biennial that pretty much over-winters too, but tends to look rather ragged with time, so I pull it out when it's time to plant the kale.

Although chard supposedly attracts moths too, I've experienced only one issue with Swiss Chard: mollusks. I end up mulching with Slug-go and spent coffee grounds as no amount of Reemay keeps those buggers out. Here, in the great Pacific North-wet, slugs and snail season is 12 months. In the gardening world, it's always something.