A Successful Garden Tour - Wish We Could Have Been There 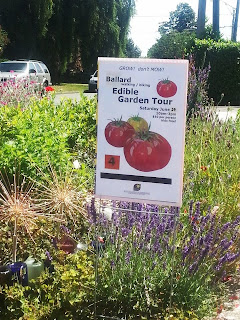 After a week of busting our humps getting the place ready for the garden tour, the place has never looked better. Nothing like a deadline to get things done! Thanks to my lovely daughter, Shawn and her wonderful husband, Rick for being the tour guides by-proxy while we were gallivanting about in Boise.

It never fails that weekend activities always come in conflicting clumps. Between winning tickets to the Antiques Road Show for Boise (Nooooo, couldn't get 'em for Seattle), Sustainable Ballard's Edible Garden Tour and a big sale going on at work, last weekend proved to be an exercise in juggling, compromising and making difficult choices.

Winning tickets to the Antiques Road Show is a crap shoot, so we decided to take advantage of the opportunity and make an extended weekend out of it. Unfortunately, the ol' job situation turned it into a whirlwind trip of three days instead five. I was lucky to get any days off thanks to a big sale scheduled for that weekend, but my boss came through for me so "I wouldn't be miserable." He probably didn't want a grump at work.

We had a good time in Boise despite the hot weather. The thermometer hit 103 in the afternoon and dropped to a balmy 91 by 10:00 PM. Thank God for air conditioning....and copious amounts of hefeweizen with lemon, of course.

The Road Show part lasted a whopping two hours. Talk about efficiency in line management. We had our assigned entry time of 8:00 AM and could line up at 7:30. So, after getting up at the butt crack of dawn (and losing an hour to mountain time PLUS a 10 hour drive with the dog making monkey noises in the back seat), we grabbed breakfast at the hotel and drove on up the the Boise Expo Center about 10 minutes away. Parking was easy. We went through the first check point then on to another building where the main line up to get into the production area was located. That snaked around like the TSA lines a the airport, only friendlier. Then the first table where you were assigned tickets for the items you brought. Folks were schlepping all sorts of stuff on all varieties of carts, wagons and bags. Our items were small, so we had two bags which contained some of my grandmother's costume jewelry, two of a series of contemporary NW Native prints, an old sapphire ring, and a set of Stickley Brothers book ends.

After we got our item tickets we proceeded into the production area to stand in the individual lines behind a circle of curtains used as the backdrop for the production. No cameras allowed at this point. Cell phones off. The appraisers were lined up on the other side of the curtains and the filming was done in the center. You couldn't hear a darn thing of what was being said out there, but there were several stations being filmed at once. We went to the jewelry appraiser, a gal from Rago Auction house. To our surprise she said the sapphire is a synthetic! She said it is a mid-century Continental birthstone ring set in 18 karat gold (we knew that much) and worth $150. Good grief! Why would anyone stick a synthetic stone in a 18 karat gold setting! One could speculate that the stone was swapped out at some point. I've also heard that real stones were hard to get back in the 1930's so synthetics were often used instead.

We also learned that the bookends were from around 1914 and worth $50-75, in our opinion way undervalued, although the guy ended up taking them to another table to get info on them. He told us that we could probably find a book with the stamp number in it to find out the pattern. Thanks. The prints had the poster guy stumped (the poster fella you always see on TV), and again weren't valued except as decorative items and my grandmother's jewelry were worth as much as the ring.

It was fascinating to see how the production was done. After we went through our lines we headed to the next room where you could go into the feedback booth (which we didn't) and then on to the sponsor's displays. We stopped at the Subaru booth and entered a drawing for a Tiffany lamp and then out the door at 10:15 AM. It was still cool enough out that we weren't entering a heat blast. We went back to the car with a feeling of "what just happened?" The appraisals were fast; not surprising since they herd through 6,000 people in a day.

Our hotel, The Riverside, was located next to the Boise river (duh), so we grabbed the dog and walked along the lovely river walk to downtown Boise to see the Farmer's Market. It's a large set up in the middle of downtown Boise (about a mile and a half from the hotel) where several main streets are closed off. I was delighted to see a number of organic farmers and ranchers there. I purchased some coffee, bread and hand-made peanut butter. The crafts people were the typical ones you see - pottery, jewelry, etc.. Boise is a conservative city, so I imagine that the few progressive, crunchy granola's are represented here. Sitting next to the Boise river. I talked to Shawn on the cell for a while. She had plenty of questions about what the different crops were, our techniques, etc. She and Rick were enjoying being the docents.

We walked back to the hotel, stopping at the outdoor cafe/bar for a beer and a bite. They allowed dogs, so Snorky sat on a chair with a bowl of ice water at hand. The rest of the day involved sitting in air conditioning, and finding the only large antique mall in town which contained the usual garage sale worthy items you usually see anymore. We were going to check out the botanical gardens outside of town, but it was just too hot. We ate dinner at the Crab Shack, duly dissing the quality of the crab (we're naturally crab snobs) and then got ready to leave town the next morning.

The way home felt faster, even when we spent two hours in Baker City, Oregon to stretch our legs and gawk at a part of the Oregon Trail. Baker City has a grand old hotel called the Geiser Grand Hotel (I'm sure it's pronounced gizer, but I kept calling it geezer). Very Victorian with the elaborate scroll work inside and out and the obligatory corner turret, beckoning to the days when area gold mines supported a robust economy. Now the town's main street supports consignment shops, antique stores and several other marginal small businesses. Being a Sunday, not much was open. It's main economy now seems to be tourism, with a museum about the Oregon Trail and recreational activities including connecting itself to the highway that goes up to Hell's Canyon.

The Oregon Trail came before the town, bi-passing it around 5 miles to the north. An interpretive center afforded a possible afternoon of pioneer education, but we opted out instead taking a short but hot hike on part of the rutted out area that was also adapted as a road to several mines. It was very hot and open. When we got back to the car, Snorky made a B-line to under the car as the only shade until we shoved him in the car and blasted the A-C. After that intermission, it was onward toward home. When we got to I-90 we hit the wall of stop and go traffic near the pass. A wreck and road construction created a 10-15 mile back-up that took 1-1/2 hours to navigate through.

Shawn reported that at least 100 people came through our place during the tour. It would have been fun to talk to folk and answer questions about our food production and what we've done to the place. I guess our place was all the buzz on the tour. Although we had a fun time on our road trip, we found the Road Show a bit disappointing and feel that the appraisers are glorified pickers for the production and we were volunteers coming to them for that end purpose. I guess I shouldn't have been surprised. If you didn't have anything instantly recognizable that wowed them, they quickly blew you off. Sorry to say that my cynicism gene got a recharge.
Posted by Unknown at 6:58 PM