Growing Potatoes in a Can

I love getting tips from other gardeners, especially when they work brilliantly. Last year, I received a tip about the best way to grow potatoes. Tired of skewering and slicing my potatoes while digging them out, this year I've planted them in a can: a garbage can that is. 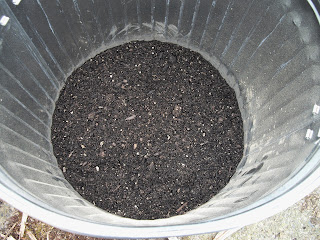 I ventured forth to the big box store and purchased a galvanized garbage can with lid. I had Roland punch 5 drainage holes in the bottom. The bottom happens to be recessed up into the can (like the round ice cream containers) which makes drainage work well. I put about 12 inches of potting soil with some bone meal in the bottom. I then placed my seed potatoes down on top of the soil, distributing them around 4 inches apart. Since the bottom of the can is narrower, you can't place too many at first. I then covered the seed potatoes with more potting soil, around 4 inches deep. I then waited for the first signs of growth. 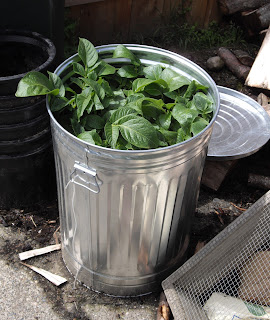 So, off I went to the big box store and picked up some more potting soil. 2-1/2 cubic feet later, I had gingerly added more soil to the top leaves of the potato plants. I'll add some more soil when the top grows more, but I can't anticipate them getting much bigger. Deeper soil layers helps keep the potatoes from becoming green, which you want to avoid since that's a sign that the tuber could be producing the nasty, toxic alkaline solanine, as potatoes are in the nightshade family. All parts of a potato plant are toxic except for the tuber. 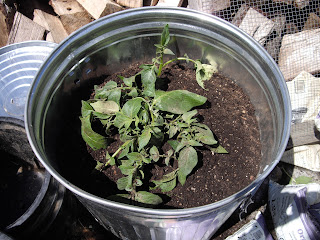 Potatoes are light feeders, but bone meal helps increase yields. Potato tubers are actually underground stems that store food for the plant. Roots don't have nodes which are called 'eyes' on potatoes. Potato eyes are actually stem nodes. The stems grow out and produce more tubers for more food storage for the plant. Actual roots also come out of the tuber as does the plant the grows towards the sun. The potato plant actually produces seed off its flower, but it takes longer to get it to produce potatoes, thus the preference for 'seed potatoes' which is a form of vegetative reproduction. Growing potatoes vegetatively helps ensure a consistent, true to type crop.

The potato geek taxonomists have divided potato growth into five stages. Stage one involves sprouting and root growth. During stage two, the potato starts forming leaves and branches for photosynthesis. In the third stage, stolons develop out of leaf axils (nodes) on the stems and grow downwards for new tuber development as swellings on the stolon. If the weather gets much hotter than 81 degrees F., tuber formation often halts. The tuber formation bulks up during stage four, when the plant invests a lot of its resources into this process. At this stage it's critical to keep optimal soil temperature, nutrient availability and balance and pests control a top priority. The last stage is maturation where the plant canopy dies back and the skins on the tubers harden. This is when sugars convert to starches.

To harvest, I'll wait until after bloom and when the foliage starts to die back. All I'll have to do is dump the can onto a tarp and pick out the potatoes. I'll put the soil back in the can and put the lid on to store over winter. Next year, I'm getting several more cans so I can produce more varieties. I'll try stretching the soil with compost. Upon harvesting, potatoes need a curing time, but I'll write about that at that time.
Posted by Unknown at 5:34 PM