I've never understood the obsession with the perfect lawn. I hate lawn. Yes, it has its places as landscape wall-to-wall carpet (in parks) or area rugs between ornamental borders, but I personally don't care for it on a number of levels. First, lawn is high maintenance. You have to mow and edge and feed the stuff copious amounts of fertilizer and water if you want it to look like anything year 'round. This fact brings up my second complaint: copious amounts of fertilizer and water required for it to look like anything adds to run-off that pollutes streams and ultimately, major water ways like Puget Sound. Ever look at ponds around a golf coarse? On hot summer days they become bubbling caldrons of excess fertilizer that promotes algae blooms.Yuck.

My third complaint is that most folk don't realize that lawn is comprised of plants. In our region, usually fescues and oat grasses. Yes, the grass you mow down to within inches of its life is comprised of a complex plant root system that prefers specific conditions like full sun. Even the so called shade tolerant grasses. Most lawns are forced to thrive on 4 inches of builder's top soil (brought in after they've scraped off all the native top soil to sell off) when the grass would prefer at least a foot of organically rich soil. So most lawns in developments look like crap without the constant chemical applications and huge amounts of water that run off into our waterways. What's worse, in this PNW climate of conifers and glacial till, the soil is full of clay, very acidic and lawns are often forced to grow in shade. This misallocation of grass seed is a grand recipe for moss that thrives on moist, shady acidic conditions. Grass prefers sweeter soil. So what do homeowners do? They resort to copious amounts of lime and Moss-out. Ultimately, a losing proposition except for the chemical companies that make billions on the whole scheme.

Talk about the poster child for male insecurities. I can't think of another marketing scheme that feeds on male insecurity (other than the physical stuff, but that's not for this blog) as much as promoting the perfect grass. It's a direct hit on male burb status. For the most part, it seems like a male obsession. Perhaps it's the women who send them out to conquer the grass in order to get them outside and out of their way on the weekends. I had an uncle who told me that mowing the grass was the only exercise he got. Sadly, he passed away at age 58 (or was it 59).

And grass can look like hell, if left unkempt. Being a nonconformist entity, Roland is one of the few men I know who doesn't care if the grass grows tall and seeds everywhere. He considers it a cover crop - to cover the cats.

I say, take the stupid lawn out! We don't live in manor houses in England (where this whole thing started eons ago) and the stuff's a pain in the patootie. There are far better uses for that spot of ground, like growing food. If you want a green patch, there are a number of ground-covers that look lovely as replacements and add interesting texture. You can put a stone or gravel path where you need to tromp around. 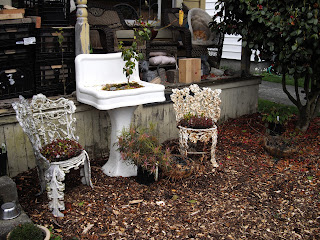 An organic way to remove lawn is to layer cardboard or copious amounts of newspaper and woody mulch. Commonly referred to as sheet mulching, I prefer the term lasagna mulching since my yard is primarily planted with edibles. First, cut the grass as short as possible. Apply several layers of cardboard down (you can get refrigerator crates from appliance stores) and then at least 3-4 inches of woody mulch. I use arborist chips. Wet down or do it when it is going to rain. And don't pick a windy day. Now this process takes some time - around a six months to a year to thoroughly settle in. I finally finished the front area and will not be planting or doing anything except maintaining the escapee's around the edges (but that didn't stop me from buying plants, of course). I'll probably apply salt or vinegar to problem areas. The cardboard and chips will compost in, attract worms and feed the soil. The decomposing grass goes along for the ride.

I purchased a gallon container of the ground cover Epimedium 'Fire Dragon' for under the Camellia. It takes dry shade, will colonize the area and blooms lovely little bell-shaped yellow and pink flowers. I'll just have to keep it alive until it can be planted. I didn't do a good job taking care that the grass stay shorn last year, so now I have to contend with digging out what seeded into the planting beds (and containers. Argh!). It will be an on-going chore as grass has a habit of coming back if all of the roots aren't completely removed.

Grass belongs in, well, grasslands.
Posted by Unknown at 2:10 PM