I've been out and about in the garden between rain storms, quickly harvesting tomatoes, cucumbers and anything else worth gathering that is at the end of its cycle. With all of the dry weather, then the sudden and intense rain I expected some of the tomatoes to explode, but cabbage? 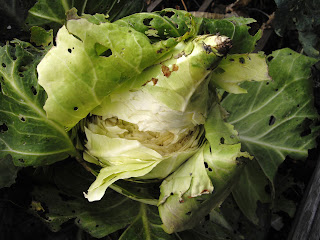 Roland came in this morning to inform me that one of the Filderkraut cabbages has a huge split in it. I went out to have a look and sure enough, the cabbage had cracked around the middle. It is one of the larger heads and needed harvesting anyway, but I was waiting to see how big it would get. I guess it suffered from too much water all at once. The last shower was that one thin mint that did it in (for those of you who aren't familiar with that phrase, it comes out of the last scene of the Monty Python movie, Meaning of Life, where a restaurant patron eats until he explodes from one thin mint). 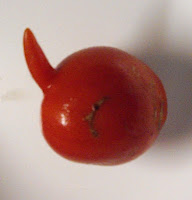 On top of exploding crops, the other weirdness has been the occasional horned tomato. I'm not 100% sure as to what has caused it, but every once in a while I find a tomato with a single horn protruding out, usually near the top by the stem. I've done a little research and the closest thing I could come up with is a problem called Catfacing. This problem is from cultural conditions where the fruits are misshapen with bulges, crevices, scars or holes at the blossom ends. Catfacing is caused by anything that damages the fruit as it begins to develop within the flower. This includes heat, dry soil, excessive nitrogen, and especially, cold temperatures. We've certainly have suffered from a combination of heat, dry soil and cold temperatures. I've been careful with the nitrogen levels this year, where too much nitrogen also tends to inhibit fruit production.

Several of the heirloom varieties suffered from blossom end rot. Heirloom varieties tend to be more succeptable to that problem than many of the newer hybridized types. I gave them a shot of Epsom salts this summer, hoping to avoid that issue, but with all of the extreme dry weather, it's been difficult to keep up with a consistent watering schedule which is also a contributing factor. Unfortunately, getting irrigation to the beds in the parking strip requires dragging a long hose over, which is a bit of a bother. I did like my set up with the plastic bottles as reservoirs which avoided overhead watering that could cause a host of fungal conditions on tomatoes. Each plant got at least 2 liters of water each watering.

Tomatoes can be so picky! I need a greenhouse. Really.
Posted by Unknown at 11:46 AM