50 Pounds of Potatoes in a 5 Pound Sack! 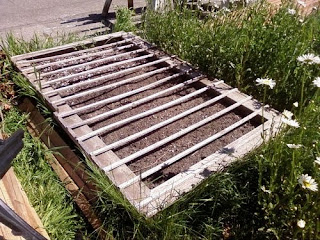 In order to maximize the somewhat small square footage, the veg's were planted a packed together as possible without compromising the crops natural growth, well, too much. Due to the cat-proofing we had to install, square foot gardening wasn't an option, so we planted in rows along the short width, using the protective grid on top of the beds as row guides. They're spaced at 4 inches apart.

Roland likes carrots, leafy greens, snap peas, beans and radishes so plenty of that has gone in. The Mesclun (Roland said, "Isn't that a drug?") is being cut back for harvest, so we hope to maintain it's growth as space is an issue for a staggered plant schedule. Roland and I like potatoes so we planted 3 varieties in one of the bathtubs which is quite deep. I put herbs in the other tub. The pH levels have been around 7, but may add more lime to the pumpkin mound as Territorial Seeds implies that pumpkins seem to like more alkalinity. 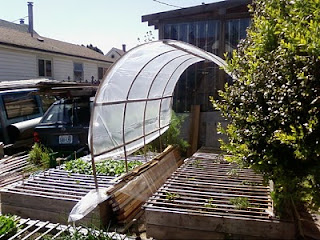 A cloche made out of white oak has been constructed over Bed B into Bed C to cover the path too. The plastic roles up on Bed's C side for access. The end flaps are attached with binder clips and can be opened for access and venting. The soil temperature of Bed B seems to be around 5-7 degrees warmer (76 degrees at 1pm one day). I planted the tomatoes and peppers deep as instructed in my Culinary Gardening class, creating a hole, applying organic fertilizer, watering in and planting the tomato up to its top leaves. The peppers got planted up to the bottom leaves.

There is zilcho room to plant starts indoors. Roland's house is infested with tools and his other belongings and the lean-to solarium contains a dead hot tub and more tools and junk. So, everything got directly planted outside from seed or from purchased starts. The fennel are transplants from my house.

The upper beds are where the main crops grow with leafy greens, onions, shallots, swiss chard and leeks in one bed. Celery, brocolli, radishes, garlic, carrots and fennel occupy another bed and a third bed contains the tomatoes, peppers, and eggplant. 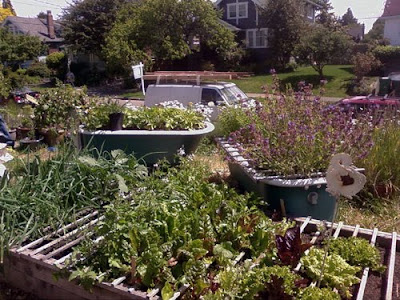 The bottom two beds on the parking strip are for beens and zucchs and pumpkin, which can vine out over the daisy terrior. I planted radishes among the squash. The clawfoot bathtubs contain several varieties of potatoes. I planted them around 6" down, but next year I would take some of the dirt out of the deep tub, plant the potatoes then cover them with dirt as they grow.

A lonely artichoke sits on a mound among the daisies. I planted some sugar pumpkins around it to keep it company. I had to stab scewers into the soil to keep the little buggers out of there.They've managed to poop among the new lavender bed on the south slope.

Being a relative veg gardening newbie and before I understood companion planting, I put the carrots right next to the fennel - ooops. The fennel did great, but the carrots..... Oh well, I tossed some carrot seeds in among the tomatoes. Also, I planted garlic this Spring which should wait until Fall to over-winter in our PNW marine climate. Also, my broccoli is uber tall, but no flowers. I just read that the Purple Sprouting variety I planted takes up to 240 days (that's 8 months, folks) to harvest! My Culinary Gardening instructor, Anne, informed me that that variety is another one to over winter. 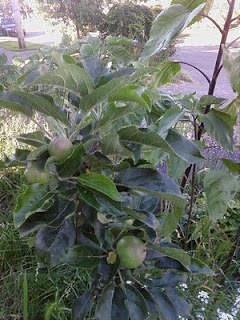 At the moment, I have to see if it can stand the summer temperatures, otherwise it's broccoli leaf soup. I guess I'll be harvesting broccoli for Christmas if it works out. As Maya Angelou says, "When you know better, you do better."

Pots contain a columnar apple and a cherry tree. Didn't get any fruit off the cherry this year, but the plant is pretty young. The apple has four fruits!

Other pots contain slug and snail food such as, basil. 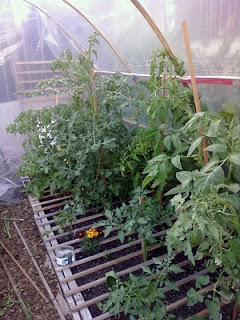 The tomatoes are growing well, but no fruits yet, just flowers. We planted multiple varieties acquired at the Seattle Tilth Spring Plant Sale this Spring. Several are heirlooms including Speckled Roman and Brandywine Salad. While working in the bed, I smucked the Sungold, so I think that's a gonner. Somewhere in the bed, an eggplant and several peppers are coming along. Time to go and prune out the suckers and shade leaves, which I think I'll go do now. As you can see, it's a bit out of control.
Posted by Unknown at 6:20 PM